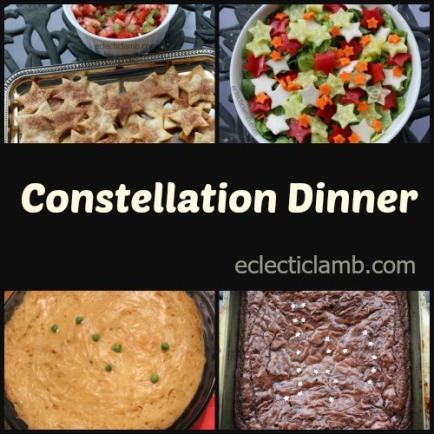 My niece and some nephews joined me for a constellation themed dinner. This dinner featured Strawberry & Kiwi Salsa with Cinnamon Tortilla Chips, Star Salad, Big Dipper Baked Pasta, and Orion Brownies. I also taught each of them their zodiac sign and showed them the constellation for their sign. I don’t think that they were impressed with their zodiac signs but they seemed to enjoy the food. I don’t believe in the significance of Zodiac signs and it is difficult to see the pictures in the constellations but I think it is considered common knowledge and kids should have a basic awareness of it.

Strawberry & Kiwi Salsa with Cinnamon Tortilla Chips: I used this recipe but did not use whole wheat tortillas, I also used olive oil and sugar instead of the coconut oil and sugar.

Big Dipper Baked Pasta: I made angel hair pasta, homemade cheese sauce (2 cup white sauce with shredded sharp cheddar cheese) and baked it until heated and slightly browned. After baking I garnished it with peas in the shape of the Big Dipper. 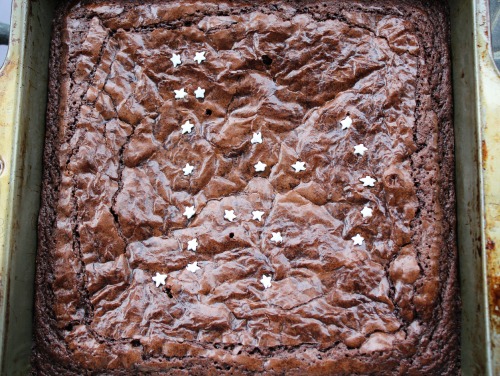 Orion Brownies: I made brownies using a Ghiradelli Brownie mix. After it was cooled we put sprinkle stars in the shape of Orion Constellation.

Consider having a stargazing party with a themed dinner to teach your kids about Zodiac signs and constellations.

https://eclecticlamb.com/
View all posts by eclecticlamb →
This entry was posted in Bento / Cute Food, Food, Party Planning. Bookmark the permalink.