Dinosaurs and Volcanoes were the topics for our second day of Aunt Kathy’s Preschool Camp.

This Volcano with Dinosaur pizza lunch was prepared for my 12 year old nephew. He was one of my two teachers for our preschool camp. My 14 year old niece was our second teacher. I acted as principal/co-teacher.

Volcano & Dinosaur: Homemade pizza. I shaped the volcano by hand. I tried several versions but was happiest with this one. The only sauce was the lava, the rest was cheese. I cut the dinosaur pizza with a dinosaur cookie cutter. Broccoli trees. 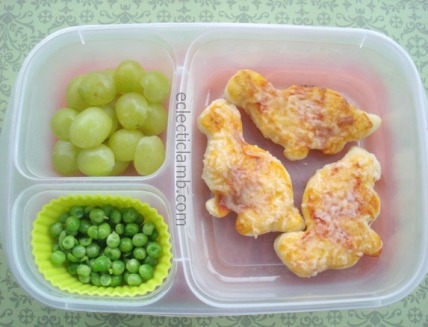 I made this dinosaur lunch for my 28 month old nephew. He seemed to enjoy the pizzas. His older brother received a Dinosaur themed Muffin tin meal. I will post it when it is the weekly theme for Muffin Tin Monday.

Fruit:  Grapes cut in half

Vegetable: Green Peas (he did not eat the peas)

Preschool: Our focus of the day was dinosaurs, volcanoes and the letter D. I made a volcano play mat with bean bag dinosaurs. We played with dinosaurs frozen in an ice egg. The young nephews were thrilled to go on a dinosaur themed egg hunt. We played with dinosaur and volcano stick puppets. Our afternoon snack was a dino dig in pudding. My niece made a paper mache volcano and we all enjoyed watching it explode. We also used Q-tips to paint dots on dinosaurs.

I sewed a volcano mat using fleece. I followed these directions. It was my first time sewing fleece and my first time with a new sewing machine. It is not perfect but the result is fine. I used this template and modified it for the dinosaurs. I used decorative felt and filled them with dried lentils. 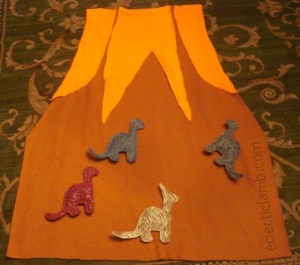 I was so pleased to find these directions. It was not a hot day but we still had fun with the dinosaurs in ice. My 28 month nephew in particular was fascinated by these.

Dinosaurs Freed from their Ice Eggs 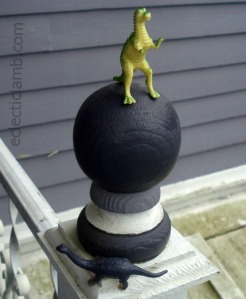 My 12 year old nephew came up with the idea of having an egg hunt. We put dinosaur stickers and plastic dinosaurs in various plastic eggs. My niece and nephew enjoyed preparing for this hunt and my young nephews had a great hunt, fun opening their eggs and enjoyed playing with their rewards.

We made volcano and dinosaur stick puppets. We found it here and used this for the dinosaurs. My niece made the design for the volcano. 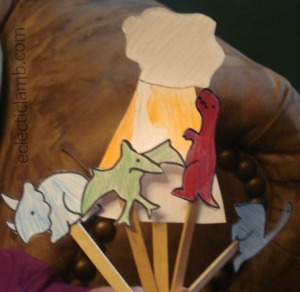 I spent quite a bit of time looking for dinosaur dig ideas. When I found this edible dinosaur dig idea, I knew that it would be perfect for our afternoon snack. Everyone from the teachers to students, enjoyed this fun dig. My nephew who is almost 5 said, “This is very special”. When they found the dinosaurs in the pudding, I quickly washed the dinosaurs so they could play with them. 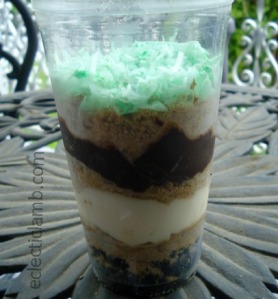 My niece made this awesome volcano with paper mache and spray paint. We put a small plastic cup in the top to hold the baking soda and vinegar. She dyed the vinegar red before pouring. Everyone was mesmerized by this activity. 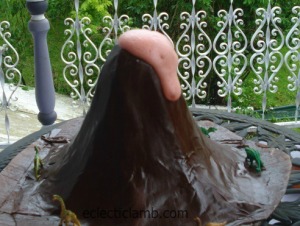 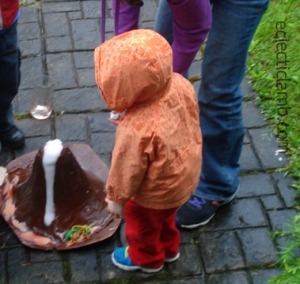